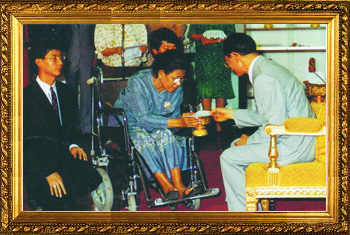 To ask how I came to stand on my two feet, try making a chicken egg stand on its own

Those closest to Khun Mae Suwaphee will understand this metaphor used to describe her tough and humble beginnings, her sacrifices for her family to put food on the table for her family as well as to give her children a comfortable life. She worked tirelessly and endlessly, soldiered on through thick and thin to bring the market to what it is today

To obtain this piece of land Khun Mae Suwaphee mortgaged the land to obtain additional loans from the Office of the Privy Purse, Khun Thian and Khun Sap Khiewkamsang, Krungthai Bank, Khun Yaspal Gore and others.  The first project was cooperating with Srifah Restaurants to open a restaurant business, however insufficient income led to the collapse of the business venture. Inspired by the Bang Lam Phu market, Khun Mae Suwaphee pressed ahead to develop the land into a market, and sought every way to gain state permission. Revered Senior Abbot Bung from Thongsan Temple inaugurated the Yingcharoen Market on 11th August 1950 but the journey to success was far from sight. Cash inflow was a major problem and increasing operational costs made it a must to promote the market. Rent was free for the merchants, making it very difficult to find money to pay the moutaining debts from the losses.  A court issued order finally came for Khun Mae Suwaphee to sell all assets to pay the debts. Khun Mae Suwaphee sacrificed whatever she can – by gathering all assets and valuables to pawn, which became the turning point for the market. She was able to gradually repay her debts and finally, in 1980 managed to pay all outstanding debts to Khun Thian.